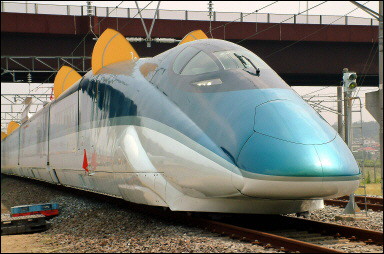 It was developed as the Shinkansen of the next generation and travelling test in the midst of execution.
When it is utilized, Max speed of Passenger operation will 360km/h.
The Yellow objects looks like ear of cat are Aerodynamic drag devices for emergency.
So people said =Nekomimi Shinkansen= (Cat eared Shinkansen).
And that's happend in Japan from next pages
=Nekomimi Sninkansen MOE Girls= .

FASTECH 360 is technicaly a test train for the next-generation Shinkansen (bullet train), which can run at speeds of 405 km/h (250 mph). It is named from the words Fast and Technology, and 360 km/h (225 mph) is the speed at which production trains will run. Production trains are expected to enter service in 2011, operated by East Japan Railway Company.

All Shinkansens are powered by electric.
TommyT Report This Comment
Date: March 05, 2006 01:54PM