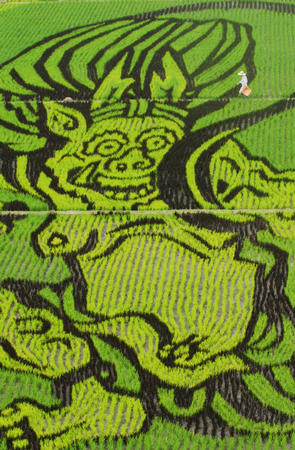 A giant image of Raijin, the God of Thunder, has appeared in a rice field in the village of Inakadate in Aomori prefecture. The different colors consist of different varieties of rice — the green areas are tsugaru-roman (the local variety), while the purple, yellow and red areas consist of so-called kodaimai, or ancient strains of rice. Mid-August is reportedly the best time to view the rice field.

Not shown in the photo is the image of Fujin, the God of Wind, presumably located in a nearby field. Fujin and Raijin usually appear together and are perhaps most well-known for their depiction in the Fujin-Rajin Folding Screen (Fujin-Raijin Zu Byobu), an Edo-period work by Tawaraya Soutatsu. The original screen is on display at Kennin-ji Temple in Kyoto and has been officially designated a national treasure.