This is me, with me ex-band "Deja Blues" trying to fade away... 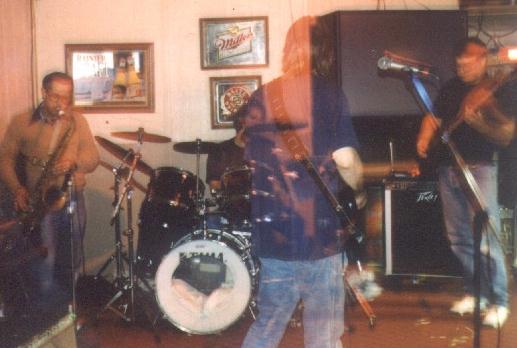 no way! steven halpern is awesome.
blues is my favorite music.
i'm a big SRV fan along with Delbert mcclinton, just to name a few.
i'm a bass player from way back

have you heard Bugs henderson?
he's another local guy that's been around forever. he plays anything by anybody along with a lot of his own stuff. awesome talent!
pro_junior Report This Comment
Date: July 19, 2006 03:49AM

Q. What do you call a bass player with a beeper?
A. An optimist.


Q. What do you call a bass player on the front porch?
A. The pizza delivery guy

LOL! The real funny thing is that my bass player in this band is missing his right index finger.

Q. What do you call a bass player who just broke up with his girlfriend?
A. Homeless.

what do you call a bass player who's band members all married into slavery?

that sucked huh? i haven't woken up yet sorry

We had a really lousey drummer at one time. We had an equally lousey gig in an upstairs room above a local hotel. The stoned-out shitstain couldn't keep tempo to save his dick from a meat-grinder and it was pissing everyone else in the band off big time. After the suck-ass, low-paying gig we were breaking down and hauling the shit downstairs (no elevator, the low-rent shit hole) and the stoner tripped while carrying his cans down the stairs, he went head over heals, drums banging, cymbals crashing all the way down. Me and my bassplayer looked at eacth other and simultaneously said, "That's the best he's sounded all night!"
fossil_digger Report This Comment
Date: July 19, 2006 04:36PM

lmao!
ithink the worst gig we had was driving to el paso, played 2-3 hrs. in a shit hole. reminded me of the blues bros. with the cage in front of the stage. at one time every person in the place was involved in a brawl, except us, then. turned around and drove home. all that for $1oo.oo each. i think we smoked and drank the profits on the road trip out and back...:~}
BlahX3 Report This Comment
Date: July 19, 2006 05:07PM

Haha! It never happened. That's just a joke I embellished on a little.

I have walked out on a gig or two though. It just ain't worth it sometimes. One we walked out on because by 11:30 there were only five people in the bar, counting the band and the barkeep and we were playing for a cut of the take and chump change. The stupid bitch owner called me the next morning and started ragging my ass saying she never wanted me to play there again. I told her to just shut the fuck up and that's just fine, saves me the trouble of cancelling the rest of the dates we had there. That is a true story.

we learned the hard way to get the cash up front. before we left the house the gig ws paid for. some bar owners would try and weasel out saying they had a bad night or some shit. oh I'm sorry, and that's my fault because? lol, the good 'ole days huh?
BlahX3 Report This Comment
Date: July 19, 2006 06:05PM

I don't even play out anymore. It's not worth it especially when it stops being fun.
woberto Report This Comment
Date: October 29, 2008 03:07AM

A ventriloquist is onstage and during his show a bass player stands up and yells,"HEY YOU! ONSTAGE! You been making smart-ass remarks about bass players being stupid all night long! We're not all stupid ya know!"
*
"Relax" said the ventriloquist, "They're just jokes!"
*
"I'm not talking to you!" The musician replied "I'm talking to that little bastard sitting on your knee!"

Q. Did you hear about the bass player who locked his keys in the car?


A. He had to break the car window to get the drummer out.

News Flash: A bus carry a 5 piece band drove over a cliff, killing 4 musicians and a bass player.