Me & my wife backstage with Kansas 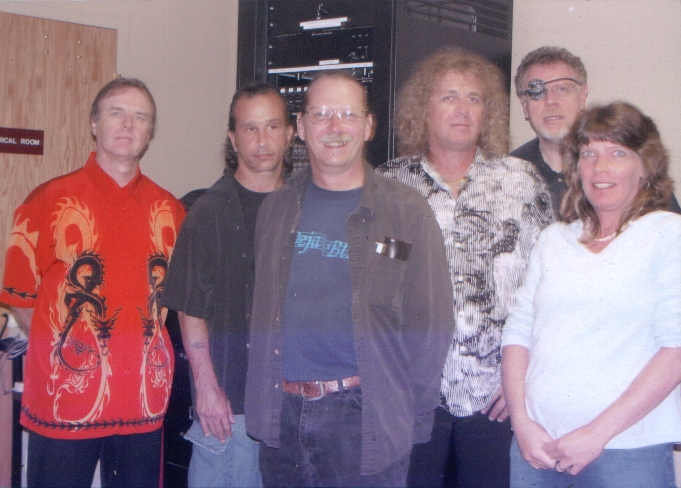 Blax why did you bayonette Kerry Livgren in the
eye?
Temuchin Report This Comment
Date: July 19, 2006 12:08PM

August, 2004 at Chinook Winds Casino, Lincoln City, OR. The damn LOUDEST fucking rock concert I've ever been to. My wife was nearly 6 months preggie. My baby daughter loves to dance. Kansas is even better live than recorded.
festus Report This Comment
Date: July 19, 2006 12:10PM

Why is the guy second fromthe left looking at you like you are tickling his testes
BlahX3 Report This Comment
Date: July 19, 2006 12:18PM

That guy is just wierd lookin'. That's his normal expression, I swear.

You mean Dust In the Wind? lol

Nah, they played that one, but when I asked him if he could play STH he said, "That was Zep, you moron." So I poked his fukkin eye out and said, "I know it was Zep, dickhead, I just wanted to see if YOU could play it but obviously you can't." I'd have broke his dick-skinning fingers too but it was before the show and I didn't want to ruin it for everyone else. (I'm such a caring bastard)
festus Report This Comment
Date: July 19, 2006 12:52PM

Har har, very funny. That's my wife when she was 6 mo's pregnant with our daughter. You can do better'n that cantchya? I realize it's not a very flattering pic of anyone but she does have a kinda funny look on her face.
fossil_digger Report This Comment
Date: July 19, 2006 09:37PM

zxz's sarcasm seminar is comin' along nicely.
:~}
when ticket scalping was a hobby of mine (mid 80's), i got back stage to just about all my favorite bands.
sat and talked with Mick Jagger one time, Geddy Lee (spelling) was pretty cool, but my all time favorite musician meeting was Elton John. he is quite cool and down to earth. i know, i know he's gay, so what, he is a really nice and interesting person. and I'm a huge fan of his music.

Yeah, I figured I go light on zxz (this time).
I haven't had the chance to meet a lot of famous folks but I did get to chat with Curtis Salgado once. I gave him a tape of mine and he actually called me at home one evening to compliment me on my talent. He's not a real widely know guy, mosty around here in the PacNW. He does a lot of blues and soul and was with Santana's band for a short time a few years back.

For the record, I have no problem with anyone's sexual orientation either. It's really none of anyone's business but theirs.

Hey fossil,when you went backstage to sit with
Elton did he push your stool up for you? hahahaaa!
fossil_digger Report This Comment
Date: July 19, 2006 10:44PM

we were standing. the funny part was an incredible girl came walking in and my chin hit the floor, i started to say something stupid to Elton like, daaaaaaaamn, and caught myself, he noticed and laughed. then he says, "hey jasmine, this is a good friend of mine", and motioned towards me. she walks over and said, (i don't remember i was drooling). the most incredible beauty i have ever seen!
i turned out not to be her type, imagine that. bitch!....:~}
BlahX3 Report This Comment
Date: July 20, 2006 12:29AM

Cool story. I think Elton John is awesome but I sure as hell got tired of all that Lion King shit.
BlahX3 Report This Comment
Date: July 20, 2006 02:59AM

Festus - Oh yeah, I almost forgot, my wife also kneed him in the nuts for calling me a moron (she's a keeper, I tell ya!). I guess that's why he was playing guitar a little hunched over with his knees together all night. Or maybe it was a leak in that plexiglass enclosed mega-speaker area hooked up to his amp that was startin' to give him the squirts. Hard to tell.

The guy that isn't in this pic was the fat hippie violinist/singer mofo who kept running back stage in the middle of songs, either to take a shit or snort some more coke (again, not sure) but at one point security ran back there after him. My guess is coke, but it coulda been both. The food at Chinook Winds ain't all that great.

I knew that wasn´t such a nice thing to say about your good lady, but I couldn´t resist. Still, her sister immediately to your right has an unbelievably bad perm. She must the drummer, then. This is an excellent picture, the loud shirt, the creepy guy to your left, you..., the permed drummer lady and the eye patch guy. I bet you couldn`t find a line with more freaks in it (you & your wife excepted, of course) if you trawled the circuses of the world. Magnificent! I give it 5.
BlahX3 Report This Comment
Date: July 21, 2006 12:17AM

Heheh. It's ok zxz. I didn't take it seriously or personally (niether did my wife, BTW). The bad perm person (male, BTW) is actually the bass-player (hear that F_D?

), and damn good (and way fukkin *LOUD* one at that. The only guy (aside from me of course) that doesn't look totally fuckin' wierdo had to make up for it with that loud-ass red dragon shirt, and *he* was the drummer.

Of course you know that my wife really didn't knee Kerry in the nads and I didn't really poke his eye out either. He did kinda stand funny when he was playing lead licks, though. I chock it up to the food there. I wish I could play guitar as good as he can.

Bet that was a cool experience blah,great memories always keeps you smiling no matter what happens in life