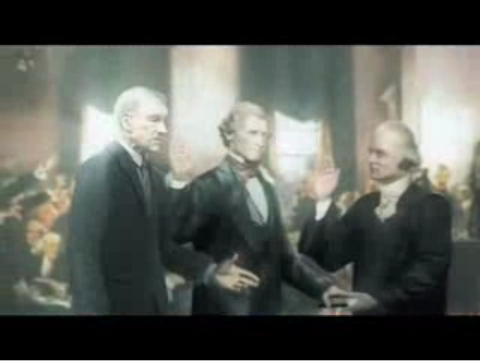 You Neo Juniors around here do nothing but shit-talk, as usual Ron Paul was/is right, things keep continuously going down hill year after year, decade after decade and you just turn your heads so you can suck up to those 'old fashioned' ways, hopefully, if you have kids, you don't insist that they keep supporting International Bankers to run their country like you did.

Quit just living your little comfortable life, that's what they hope for (beer - sports - shopping - TV), and start getting down to business.

Ron Paul is so great... yeah he does reflect those same (philosophical idealist) ideals that your founding fathers (yes, those are the same ideals also that view women as inferior) had.

And this particular nut case with the utopian idea that it is possible to go backwards, instead of completely smashing the imperialist machine, to a time before the U.S. had reached its highest and final stage: imperialism. That is why he can not even run in an election like you want him to. These elections are only to channel your political energy (and quite correct anger) into the ground. This is not how decisions are actually made, and if someone who talks about going against the interests of the rulling class, Ron Paul for example--which his would actually be very good for that rulling class, except for the fact that it is completely utopian--, if this were to run, it could never (and I'm pretty sure he himself understands this too) expect to win. A revolution is not a bourgeois election... that wasn't how the bourgeois rose to power in their revolution. For fuck's sakes look at history (historical materialism too, instead of the propagnada history that is written by the victorious)! A revolution occurs when the productive forces have advanced so much beyond the production relations that they two are now in antagonistic opposition... so antagonistic that a major crisis is in all spheres of society... so much so that the people are driven, out of necessity not out of consciousness, to smash the superstructure--the political state, the institution...etc.--that sits ontop of the economic base... a revolution is a qualitatively different society with different production relations than the previous one...
(the American Civil War is an example of revolution... this was actually the bourgeois revolution come full circle in this country)


LMFAO... you Ron Paulites are an echo of the Kautskyites that sold their books out of Jefferson Bookstores (lmafao fucking fake ass reformist phony ass communists), the CPUSA. And now yall fucks are going to use this him being excluded from the elections as an illigitamate candidates to push this agenda and this phony revolution. You are falling once again into the hands of the rulling class... ever shaped and moulded to whatever they desire... nothing more than mind slaves. And as long as you play this game (which believe me, they desparately want and need for you to play their game) we all will continue to be in this shituation.

In short: fuck Ron Paul and the founding fathers of this rotten country

Try as I might, I have been unable to find anything wrong with Ron Paul, except for being utterly bat-shit crazy.
the author Report This Comment
Date: October 16, 2008 03:23AM

Ape boy, is that the best script you can come up with?

shadez, communism is the calling card of those elite bastards, shut the fuck up, by the way, men are superior to women, that's common sense, you must be the feminist bitch of the group.

Here is a lesson in reality for everyone, the real goal of your government is not 'for the people,' it's profit for the higher ups.

Look up your local police department corporation over at D&B.

shadez, quit following the Zionist Commie's, the are feeding you regularly I see. Zionism is just a giant scam, a tool to manipulate the masses, here, even a prominent Jewish Professor say so.

If the "higher ups", the rich elite, the upper 1% really decide the presidency then our next president will be John McCain. Obama plans to heavily tax that income group where as McCain probably will not.

It will be interesting to see what happens this year.

The second irony is that, while Jefferson extolled the yeoman and the notion of a yeoman-based society, he firmly believed that such yeomen had to be led and headed by members of more elite strata, intellectually and economically—of which Jefferson himself was a representative. And here is an irony within this irony, so to speak: With regard to “Jeffersonian democrats”—this applies to bourgeois-democrats more generally, but in particular to those who uphold and extol Jefferson and his ideas and ideals as the model of a great society, even if it has yet to be fully achieved—many of them are among those who are very quick to attack communists, and in particular Lenin and his work What Is To Be Done?, for alleged elitism! How often have we heard them say things like: “Communists like Lenin think that the masses are too stupid to know what’s good for them! They think these masses have to have elite intellectuals ordering them about and telling them what’s good for them, since they’re too stupid to know what they really want and need—that’s what the communist view is, that’s what Lenin was arguing in What Is To Be Done?”

Here, I don’t have time to go into all the ways in which that is a gross distortion of what Lenin was actually arguing in What Is To Be Done?. But the fact is that the essence of what he’s arguing there is the opposite of these accusations: He is insisting on both the ability and the necessity for the masses to understand the basic dynamics of objective reality, and of human society in particular, in order to consciously struggle to transform society, to make revolution with the final aim of bringing a communist world into being. He is emphasizing that this is the only way that such a radical transformation of society can actually come about. And, yes, he is insisting that the masses need a vanguard to lead them in this struggle—a vanguard whose purpose is precisely to enable the masses themselves to make revolution, and not to substitute for them (or attempt to substitute for them) in doing that.

So here’s “the irony within the irony”: Many of these Jeffersonian (bourgeois) democrats never tire of hurling the charge of “elitism” against communism, and against Lenin in particular, and yet their hero and model Thomas Jefferson was himself a firm believer in the idea that the common people needed an economic and intellectual elite to guide them to the virtuous society. This is the logic Jefferson would have followed, if he had actually tried to bring such a society into being—which he did not.

...and the Zionist thing, yeah ummm who has helped a great deal in the crushing of the Palestines... this hollocaust, this ethnic cleansing. Was it those big bad ole commies? No, the state of Isreal this was a necessity to have as a base in this strategic part of the world for U.S. empire. Many great communist leaders and the founders excluding Mao Tsetung were from Jewish descent... (well for that matter, I myself am from Christian descent, does that make me a believer in that horse shit, does that make me a supporter of Palin,... even though there are some Christians that their religios convictions drive them to do away with all this oppression and those I do unite with, but still does not make me a Christian, does not make me not want to struggle with these particular Christians--and all other types of religious people--that god, spirits, afterlife, is all bullshit.) And after the Bolshevik revolution Russia became the first to stop state sponsored hatred of the Jews. Why, because it was racsist, because there is no justification of the persecution of Jews and if you ever wish to get to a classless society (communism) then you have to do away with all such nonesense, all chauvenisms...

(you're obvious in your antiSemitism in even accusing communist as Zionist... it is a classical charge which first appeared when Hitler was looking for a way to persecute communists, the same Hitler that modeled his empire after the U.S.)

however if you enjoy these outrages then by all means do go against the communists and continue to dogmatically believe the line that "there was at one time something good about America... back when it was first founded, we need to go back to those good ole days." And again I have to bring up the fact that this Ted Bundy of a system was founded on genocide and slavery, and this slavery was only ended when the productions relations of the slave owning class of the South came into direct antagonism with the production relations of the capitalist class of the North, not becuase they thought it was morally wrong for a man to own another... hell they still viewed Blacks as only three fifths of a human being! If you are backwarded enough then by all means do clasp on to this rotten shit, but be warned that it ain't gonna hold for too much lonmger as is and can not be reversed because that is not how capital works. If that was actually possible there never would have been a Bolshevik revolution... not to mention evolution wouldn't work either, but that perhaps is completely over the heads of the users here and is out of my own abillity to even begin to attempt to explain. Learn the concept of dialectecal materialism, which is the foundation of what Marx and Engles develloped, which has yet to be disproved, and apply that to all material (the part of the universe that actually exists).