The Bosnian Pyramid of the Sun 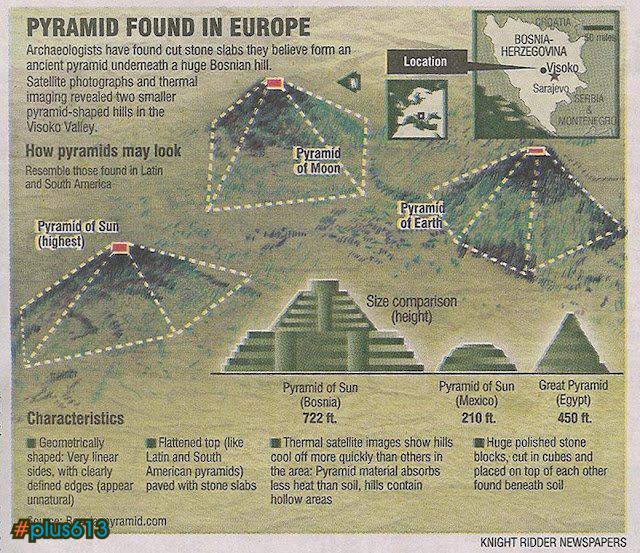 Comments for: The Bosnian Pyramid of the Sun
fossil_digger Report This Comment
Date: January 15, 2013 03:45AM

It is said to be older, more precise and larger than the Great Pyramid in Egypt* "In 2005, archaeologist Semir Osmanagic discovered several structures covered by topsoil and vegetation. An international scholar of worldwide pyramidal structures, he recognized the manufactured angles and coordinates that characterize pyramids on five continents. Subsequent, excavations and scientific testing of artifacts have dated several structures from 12,000 to 34,000 B.C.

Intentionally hidden, the covered pyramids were considered to be natural hills. The Great Bosnian Pyramid, formerly known as Visocica Hill, is the first European pyramid to be discovered and is located in the heart of Bosnia, in the town of Visoko. The pyramid has all the elements: four perfectly shaped slopes pointing toward the cardinal points, a flat top and an entrance complex. On top of the pyramid are also the ruins of a medieval walled town, once the base of a Bosnian king Tvrtko of Kotromanic (1338-1391). Because of its similarities to the Pyramid of the Sun in Teotihuacan, Mexico, it has been named the “Bosnian Pyramid of the Sun” ('Bosanska Piramida Sunca')...On the site, Sam has also discovered underground tunnels that connect the pyramids: 'We found a paved entrance plateau and discovered underground tunnels'."

I thought that they were angels, but to my surprise,
We climbed aboard their starship, we headed for the skies