The Railroading of Geet Wilders 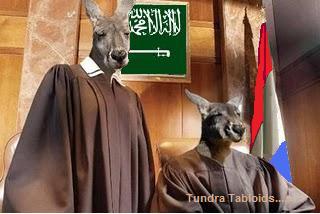 Sorry for the misspelling in the title it's Geert Wilders.

Sorrowfully it seems his trial and ability to mount a reasonable defense will be severely minimized as he's been disallowed all but 3 witnesses and none of these witnesses testimony will be allowed heard in open court.

Dunno why they're even bothering with a trial at all as it seems the verdict is being pronounce pretty clearly already by their actions. This is a sad day for anyone (but Muslims) who actually believe in religious freedom.

Here's a cuppla links for anyone who's interested in this travesty and miscarriage of justice [www.brusselsjournal.com] [blogs.telegraph.co.uk]

Haven't even read a peep on this in the US media .... which is all too sadly predictable

Hmmmm.... I have to say this is the first time I looked into this at all, I 'heard' his name before but didn't even know what it was about.

You know me, I'm wacko but everyone better watch out because places like AIPAC (American Israel Public Affairs Committee) push OUR Congressman and Senators into passing 'hate' laws just like the ones over in DUTCHLAND and there are some here right now saying... "oh, that'll never happen here"..... yeah, right, that's what you said about _____________ (fill in the blank)


Never, never let any government tell you what you can and can't say by law.

What would you do if you were arrested for calling someone a name?

BTW, here's Pat Condells take on it, right on as usual [www.youtube.com] This trial has implications that stretch far past the borders of the Netherlands.